The first time I heard mention of Chokgyur Lingpa was in 1976 when Dilgo Khyentse visited Europe. When I heard that he was in Europe, even though it was the dead of winter I immediately set out hitchhiking to the south of France where he was at the time. It’s actually a quite funny story, so perhaps I should backtrack a little.

During my first trip to India and Nepal I stayed in Darjeeling as I mentioned earlier. I stayed in a room at Gandhi Road No. 54. My travel permit would only allow me to stay for two weeks, but Tulku Pema Wangyal, who spoke English, had agreed to teach me. During that short time they were doing special pujas everyday because Kangyur Rinpoche had recently passed away. One day, I heard that some lama named Dilgo Khyentse Rinpoche was coming to visit from Bhutan, and I noticed that when others heard this they just lit up and appeared quite thrilled at the news. 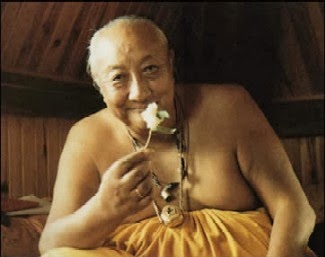 Though I had never heard of this lama before, I concluded that whoever he was he must be quite special. So when his jeep arrived I ran down to the gate with everyone else to see him. The door to the jeep opened and out stepped this tall magnificent figure. He was a good foot and half taller than anybody else. He seemed completely unaffected by all the commotion. Later when I got to know him better and had spent some time visiting him, I discovered that he was always like that: completely at peace and stable. No matter where he was, who he was with or what was happening around him he always remained the perfect picture of total stability in samadhi. It was readily apparent that, if he hadn’t already been stable, then he certainly had become so during the many years he had spent in retreat.

Upon that first glimpse of him my mind just stopped. I saw photos that Ravinder Rai had taken at the time, and I am simply beaming with a grin from ear to ear. I remember I was allowed to hold his hand as he stepped into the building, he didn’t say a word and I was utterly tongue-tied and couldn’t speak. I didn’t really receive any teachings from him, except for when he explained about prostrating and a couple of other general things.

Nonetheless, his very presence had a profound effect on everyone—it was truly liberation through sight, as is readily apparent even by those who have seen a photograph or movie clip of him. He was a beautiful, beautiful man. If the sun and moon were to take human form then it would be as the 16th Karmapa and Dilgo Khyentse—they shone so bright that they were simply impossible to ignore. When either of them walked through a crowd, the sea of people would just part. People wouldn’t just turn their heads they would turn their entire bodies and even their minds would turn in a new direction permanently. I was so happy. Only a week before I had met the Karmapa and now I had met Dilgo Khyentse whom, it would turn out, I would become much closer to. I don’t know if my bliss was due to my naiveté or simple stupidity but whatever the cause it felt wonderful. Just seeing him I thought, “Wow! Now there is a real guru.”

I later discovered that he was the guru to the royal family of Bhutan and many of the important lamas that we know today. He was nonsectarian and received teachings and empowerments from almost all the schools and lineages available in Tibet. At one point, it came to be that no one in the Kagyu school held the transmission for the dohas by the great siddhas of India. Hearing this the 16th Karmapa said, “Call the old lama from Bhutan!” So they sent a request to Bhutan and Dilgo Khyentse went to Rumtek and transmitted the songs of realization of the great masters of India as passed on through the Kagyu school. Chokyi Nyima Rinpoche was there studying at the time and received them as well.

Even when he died, everyone wanted to host his body at their monastery if only for a few days so that they could all honor him and pay their respects for all that they had received from him. Orgyen Tobgyal Rinpoche once said, “We are so lucky that everyone thought that he was Nyingma, as this allowed us to spend more time with him.” However Dilgo Khyentse himself never said that he was a Nyingma lama, he was just who he was and simply agreed to give any teachings or empowerments that were requested of him. He had spent so many years in retreat, that he had not only received a great number of teachings but practiced them as well. This is quite rare, for many people receive all kinds of teachings but then don’t take the time and dedicate themselves to actually doing all the practices.

Because Dilgo Khyentse had actually practiced however whatever he taught or passed on seemed to have incredible weight behind it.