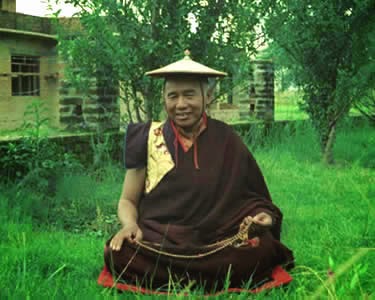 I first met Tulku Urgyen Rinpoche, when the monastery was nearing completion; the consecration took place the next year. Unlike Dilgo Khyentse or the 16th Karmapa, I walked right past him without ever noticing him or thinking that he was anyone special. He was almost invisible. He put on absolutely no airs, instead walking quietly and humbly with his head down. That humility permeated his teaching style as well.

The first time I met him was when Chokyi Nyima Rinpoche told me that I should meet his father. Not knowing anything about Tulku Urgyen at that time I simply thought, “They must be very close family and he loves his father very much.” So I got a white scarf and found Tulku Urgyen outside on the construction site talking to a worker. I went up, bowed down and offered him the scarf expecting him to give it back along with a pat on the head as blessing. But nothing happened so I looked up to see that he was also standing there bowed as well. I leaned forward a little thinking that perhaps I was too far away for him to reach. Then he leaned forward as well and we touched heads which is a common form of greeting in Kham. I couldn’t figure out why he hadn’t put his hand on my head and given me a blessing like lamas normally do. It was almost shocking in its simplicity and humility, and struck a very deep chord within me. In a way this was the essence of his teaching: a deep and abiding respect for everyone. Whether meeting the King, an illiterate villager from the mountains or even an unemployed student from Europe like me, he treated everyone equally. Later when I became familiar with his teaching it was quite apparent to me that he taught everyone equally, no matter your social standing or background he would take the time to help guide you to see the true nature of your mind. He saw, as clear as daylight, that everyone possessed the nature of enlightenment, in this all were equal and worthy of respect no matter their social standing.